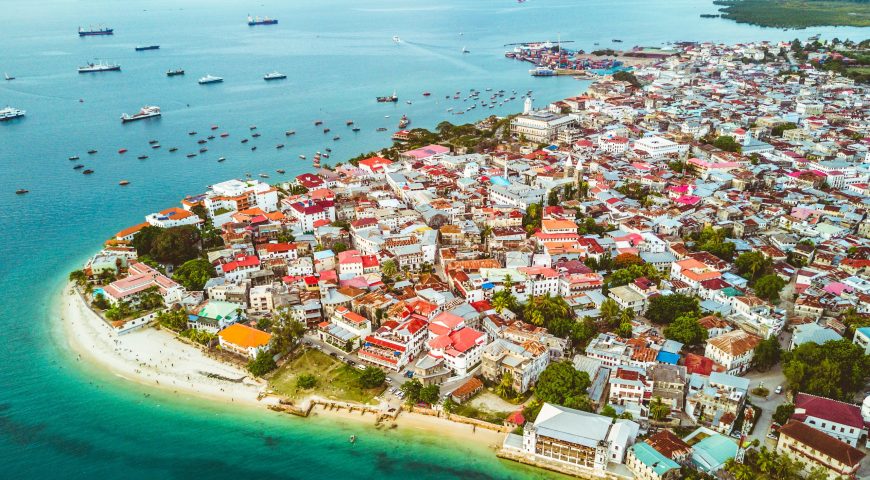 The Zanzibar Archipelago, located in the Indian Ocean 15 miles off the coast of Tanzania, also known as Unguja, and Spice Island, is a popular breath-
taking spot to escape from the world.

Apart from pristine waters, and the white sand beaches of Zanzibar, the rich cultural history, and idyllic geographic location are one of the many
reasons that attracts tourists throughout the year.

Tourists can choose from enjoying a relaxing holiday in one of the many high standard hotels scattered by the coastline, to exploring the rustic Stone Town. Or dwelling into the history of this beautiful but mysterious island. Zanzibar makes a holiday destination like no other.

Here is where you will see diversity, you’ll experience how the African tradition has blended with other cultures and traditions of the Arabs, Indians, Persian and other Europeans, and this is very evident in the
infrastructure especially the historic buildings found here, and the narrow un-ending alleys too.

When walking through the old city of stone town, our guides will tell you more about the famous former residents in the likes of princess Salme, Farrokh Bulsara and Bi Kidude and trace their history. This amazing half day tour will include visits to places like the Darajani town market, the former slave market, Forodhani Gardens where you can see wonders, the
sultan’ palace and much more. Our guide will also take you through shops where you can purchase art, crafts or other souvenirs for the best price possible

Here is where you’ll realize why Zanzibar is also called the spice island. You will visit the rural areas of Zanzibar where locals have farms where they grow cloves, vanilla, nutmeg, cardamom, cinnamon, pepper and many other spices, they also grow curative and decorative plants, you’ll also get a variety of tropical fruits, and guess what. You will get to learn about the Zanzibarian culture which includes learning about the different spices and how they’re used in dishes as well as details on the herbal medicine and traditional ceremonies. You will also visit the Kidichi Persian baths which was built in 1850 by the first sultan of Zanzibar, Seyyid bin Sultan as a
present for his wife Princess Shehrzard.

Stone Town is the old city and cultural heart of Zanzibar, little changed in the last 200 years. It is a place of winding alleys, bustling bazaars, mosques
and grand Arab houses whose original owners vied with each other over the extravagance of their dwellings. This one-upmanship is particularly
reflected in the brass-studded, carved, wooden doors -there are more than 500 different examples of this handiwork. You can spend many idle hours
and days just wandering through the fascinating labyrinth of narrow streets and alleyways.

This is a walking tour that takes you through fabled Stone Town, where history appears to stand still. With visits to the House of Wonders, the former slave market for East African Slave trade, and the Arab Fort
amongst others, itis a fascinating look at the essence of Zanzibar. The architectural style of Stone town buildings is a unique mixture of various influences and culture. You will see Zanzibar’s bustling market, winding alleyways, ornately carved and studded doors, two cathedrals and countless mosques!

Ever dreamt of seeing dolphins? Start your morning in Kizimkazi, previously known as the capital of Zanzibar, where the oldest mosque in East Africa is built. This distinct place of worship was built by the Persians in the 12th century in southern Zanzibar, after having a look at the mosque you will board on a boat to look for the dolphins, and if you’re lucky enough you will be able to swim with the dolphins as well, after the boat trip you can also go for snorkelling where you’ll see lots of little fishes and the beautiful, colourful, attractive coral reefs.

After that you will be provided with some delicious Swahili snacks, you will then head to the Jozani National Park which is one of the rainforests left in
East Africa, you will walk through a pleasuring green swamp forest on a specifically designed pathways into the Mangrove where you will get to see adorable cute monkeys moving together in groups, eagerly waiting to see you!

After a 30 Min journey from stone town by boat you’ll arrive at Changuu Island Also Known As Prison Island This island was previously owned by an Arab, it was where resistant slaves were captured but no prisoners were kept here, it became a place where yellow fever became epidemic. This island was purchased by General Lloyd Mathews, also the Jail built in 1893 still stands therefore the name prison island.

Another interesting historical fact is that a British governor of Seychelles sent four Aldabra giant tortoises to changuu in 1919, however today that
species has been placed on the IUCN red list which means it is in danger of extinction. During the tour you will be taken to the prison island and the vast land tortoise, you will be able to have a great experience of observing and feeding the tortoises, swimming, snorkelling and of course having a
sunbathe

A full day enjoyable trip on a traditional sailing dhow assembled by the locals. The journey begins from the fishing village of Fumba, which is a great place to start as you’ll be able to view the Menai Bay whichisa
conservation area, it consists of many abandoned islands, remote sandbanks, a flawless marine life and a pure clear turquoise water where a number of humpback whales and bottlenose dolphins can be found.

This tour will also include an opportunity to go snorkelling on a reef and thereafter a delicious seafood lunch. After the lunch you will get to join
experienced crew to sail on a “ngalawa” an outrigger canoe which is made from a mango tree, you will also be able to swim through flourishing mangrove forest found inan alluring lagoon.